When she was young, one of her favorite books was The Quiltmaker's Gift​ written by Jeff Brumbeau and illustrated by Gail De Marcken.

The Quiltmaker's Gift, a New York Times bestseller and a Booksense Book of the Year, tells the story of a greedy king, who with the help of a generous quiltmaker, learns to find happiness by giving his possessions away.

This book has a positive message for both children and adults; and focuses on generosity, the joy of giving, compassion, and caring for those in need.

In addition to having a literary theme, all the barn quilts have a visual theme as well. Each quilt has at least one paint color that is featured in another quilt on the trail. In this way, when photographed the quilts complement one another.

About the Author, Jeff Brumbeau

According to The Quiltmaker's Gift website, Mr. Brumbeau's "exposure to independent, self-sufficient women...inspired him to write children’s stories that featured strong women, as in his first two books [including] The Quiltmaker’s Gift.  The Quiltmaker is independent and she has scruples.  Ultimately, it is her clarity, determination, and vision that overcome the resistance and the greed of the king and help him discover a more joyful way of living though giving."

The website also noted that when Jeff was growing up he was "interested in tales with a strong moral base, especially those found in eighteenth and nineteenth century children’s literature.  In his stories, he wanted to create the same vibrancy and ethical values that are found in the classic tales of Hans Christian Andersen and the Grimm Brothers.  For The Quiltmaker’s Gift, he selected the quilt as a symbol for the theme of giving and sharing, because a quilt represents the ultimate gift.  It offers both practical warmth and artistic beauty."

​About the Illustrator, Gail De Marcken

On The Quiltmaker's Giftwebsite, it is noted that "Gail...found models for her characters in the people and figures that populate her world."

It also mentioned that "In a Latvian church near her home, she found a polished head that she liked for the king in The Quiltmaker’s Gift so much that she made his crown fall off a number of times so that they could see it.  It is to Gail’s niece that the king is reading to when the Quiltmaker finds him at the end of his gift-giving travels.  She also met a merry woman who became her inspiration for the Quiltmaker and she became great friends with her."

“YOU HAVE NOT LIVED TODAY UNTIL YOU HAVE DONE SOMETHING FOR SOMEONE WHO CAN NEVER REPAY YOU.” 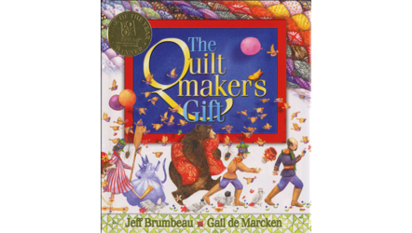