This quilt block is called "Bear's Paw" and it is found on page 18 of The Quiltmaker's Gift. This part of the story says:

Later, when the bear's eyes opened and he saw the woman in his cave, he stood on his mighty hind legs and gave a roar that rattled her bones. She looked up at him and sadly shook her head.

"It's no wonder you're so grouchy," the quiltmaker said. "You've nothing but rocks on which to rest your head at night. Bring me an armful of pine needles and with my shawl, I'll make you a great big pillow."

And that is what she did. No one had ever been so kind to the bear before. So he broken the iron bracelet and asked her to spend the night.

(On the next page it shows the quiltmaker and bear having berries and honey for breakfast.) 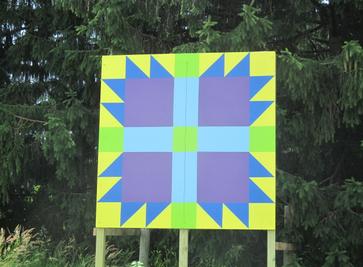